In the next 5 years it’s expected that lot’s of companies will try to migrate their applications and services from monotlith into microservices. Now, we all now that for most of them, this is a very difficult thing to do. Especiall when there are services running in machines that they haven’t been touched in years… So, what will happen is that all these companies are doomed to have 2 infrastractures. One infrastructure based on what they already do (e.g. OpenStack) and one with containers and Kubernetes. Now, this project, KubeVirt comes into play and tells them that you just need one infrastructure in Kubernetes. In case you have any VM, they can easily be migrated to run in Kubernetes – that’s it.

In this guide, I am going to use minikube simply because this is the fastest way to deploy a k8s cluster and do some dirty testing. Now, this is not just my opinion but in general, minikube is considered to be the hello-world of Kubernetes. Actually, it’s nothing more than a toolbox which we are using via the command line in order to setup a local k8s cluster. However, this is not going to be a cluster similar to the ones of AWS or Azure, but a small single-node cluster for educational purposes – which seems to be quite enough for someone who wants just to have a taste of Kubernetes or test his own apps locally.

Since, the purpose of this article is not to show you the features of Kubernetes which are related to the management of applications in a multi-node environment, it’s sure more than enough to demo the basic functionality of KubeVirt. Also another reason I prefered to use minikube in this article is simply because it’s cross-platform. So, if you are using Mac or Windows PC, you can still follow this guide. Last thing, is that with minikube our Kubernetes cluster is always running with the latest bleeding-edge version of Kubernetes, so you can be up to date with the modern stuff and also keep an eye on the documentation. So, if we can be updated and also learn something in the meantime, then why-not?

KVM Configuration (you should have but you never did)

As I said, there are many ways that someone can install a Kubernetes cluster. Everyone nowadays re-invents the wheel by offering their own N-th-kubernetes installer. Anyway, in this article I have decided we are going to use Minikube purely because of lazyness, so if you feel more adventourus than me, feel free to deploy Kubernetes in whatever way makes you happy.

Minikube requires some kind of virtualization technology to be present, so since we are in Linux, there’s no better choice than KVM. To install KVM in openSUSE, do the following in YaST:

By now, you should have installed the following packages:

Then let’s make sure that any normal user is able to connect and interact with libvirt, without any need for root priviledges. First off, we configure the sockets to be owned and be accessible by a certain group (e.g. libvirt group). Before doing that, make sure that the group libvirt already exists in your system:

If it doesn’t exist, then just create it:

Now, make your normal user is part of libvirt group:

Also, we need to change the configuration which is related to the access of the Unix socket. The group ownership should be libvirt, the permissions for the socket should be srwxrwx--- and lasty disable other authentication methods in order to handle this solely by the socket permissions itself. To do all of those, change the configuration in /etc/libvirt/libvirtd.conf as follows:

After configuring the socket. Let’s do the same for qemu. Edit /etc/libvirt/qemu.conf and change the configuration as follows:

Then, make your normal user a member of the group kvm:

This step is needed to grant access to /dev/kvm, which is required to start VM Guests as drpaneas.

To take the changes into effect, restart libvirtd:

From now on, drpaneas is able to communicate with virsh. You can test this, to make sure of it:

Typically, we would use kvm driver but by the time of writing this blogspot, it’s considered deprecated. This is why we are going to use the new modern kvm2 driver. To install it, type the following:

Make no mistake here: this is not a binary, but a docker machine plugin. These are not intended to be invoked directly, but use them through the main docker-machine binary. This is the one that minikube uses.

Unfortunatelly, there is no minikube package in our official repositories. The Containers Team is building one, which you can use it if you add their repository – however I would strongly advise you to avoid it. Simply because the version that is maintained there is quite old compared to the upstream. So, the only option in that case is to pick-up the upstream binary directly:

Using minikube we are going to deploy a Kubernetes cluster. This will utilize KVM and run a single-node cluster inside a virtual-machine.

If everything went smoothly, you should be able to see your minikube virtual-machine running:

JFYI whenever you want to get rid of it:

Talk with the cluster

In order to communicate and interact with the Kubernetes cluster, we need kubectl – kubecontrol, which is nothing more than just a client which talks with our cluster using the command-line. This time, openSUSE does provide a package, so let’s trust our maintainers in this:

In case you are more of a visual guy, open the Kubernetes Dashboard:

With minikube running, you can easily deploy KubeVirt. If you want to know more about it just read the online documentation

Note: The initial deployment to a new minikube instance can take a long time, because a number of containers have to be pulled from the internet. Use watch kubectl get --all-namespaces pods to monitor the progress.

At the end you should have these extra pods:

KubeVirt works using PVCs – Persistent Volume Claim – and the easiest way to create them is by using fabian’s plugin:

In order to create a new PVC called leap15 with a size of 10Gi and copy the local ISO into a file called disk.img on the new PVC.

Connect to your Virtual-Machine

That’s it, your VM should now be online, converted into a Kubernetes Pod object:

To connect to our VM, we need VNC, and especially virtctl: 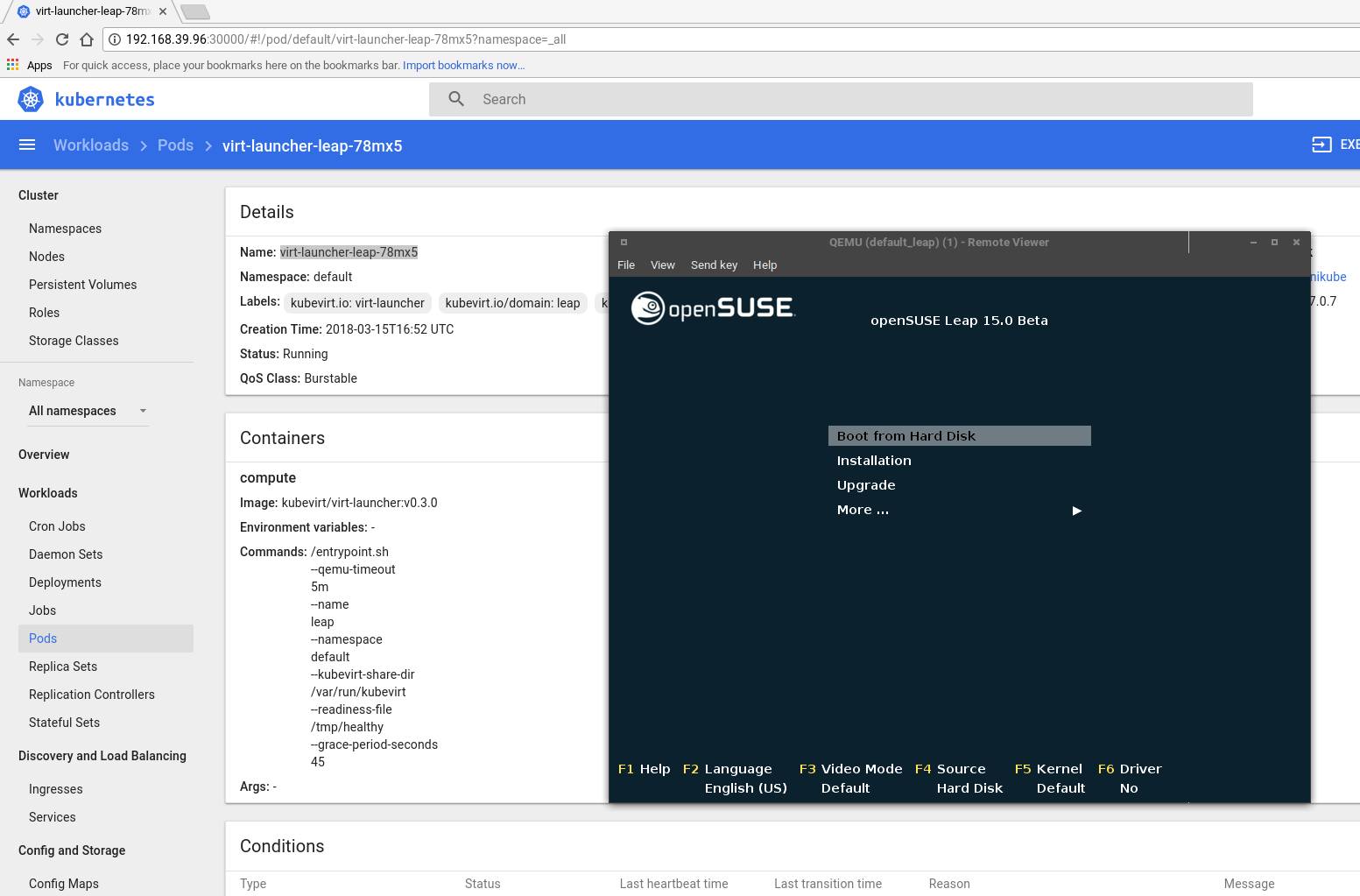 To sum up, this is just a project in a very early stage. The virtual-machines are running in emulation mode, which makes them horribly slow. However, performance drop is affected by a regression due to refactoring – but they will soon fix it, so stay tuned!

In the end of it, I hope you guys liked that project and go over KubeVirt GitHub page and click at Star to support the devs.